The #1 Money-Wasting Mistake People Make in Their Business

If you’ve been reading the blog for a while now, you may have read things I’ve written on this topic before.

It’s one of the few topics that I’m SERIOUSLY opinionated about.

For the third time now, I’m talking about a few big issues I have with the outsourcing site, Fiverr. If this entire topic is new to you, feel free to dive a little deeper into the two biggest problems with sites like Fiverr:

The only reason I decided to talk about this topic again is because I’ve had countless conversations with people who told me about their own experiences using Fiverr to find creative and business service professionals. Most of the stories had similar beginnings:

The most frustrating thing to me (a hard-working creative entrepreneur who works tirelessly to provide quality services for my clients) though, was that a lot of those stories also had similar endings.

In this post, I’m sharing how many of those stories ended as I outline a few unfortunate issues people have when they decide to hire on Fiverr.

Issue #1: Paying for work that is a total waste

Something I can’t stand hearing is how the work people get back from Fiverr hires is total junk. So bad it serves no purpose at all. This means, in some instances, people are literally paying to have their time wasted.

Here are two examples of frustrated entrepreneurs who wasted time on Fiverr:

“I was struggling to choose a blog name. I put a request on Fiverr because I figured $5 was worth investing for a bit of inspiration. I got contacted by this guy who seemed to know what he was talking about. He had a couple of reviews, so I thought [he might just be getting started on the site]. He was quick to turn around my order, but his ideas for my blog name weren’t even words, or names that had anything to do with my blog (and this was after me giving him a full brief on the [focus and direction] of my blog). Some of his ideas were things like: Steerz, Inchey, Raft Girl, Our Inks…. So, I asked for a revision and then got more stupid names I simply couldn’t use. So, eventually I gave up on giving him further instruction. But, what could I really expect for $5?” (Ana, The She Approach)

“I wanted a new logo, but wasn’t prepared to take on an entire rebrand. So, thought Fiverr would be a good place to get some ideas prior to working with a professional designer. I had a few really specific requirements for the new logo: It needed to be text-only (NO images), I needed it to be in both horizontal and vertical dimensions and it needed to be simple. I paid two “designers” on Fiverr to create 3-5 samples and I provided tons of context on my business–what I do, who I market to, etc.

One designer returned plain, horizontal text- with a line above and below it. One was grey and black. One was black on white. One was white on black. Apparently that was three samples — exactly the same design, in three different colors.

The other designer returned two samples image logos that had nothing to do with my business. And the third was simply Times New Roman text with a line above and below the text. All three were horizontal.

I asked both designers to review the direction and update their work. One disappeared and the refunded my money with no additional communication.” (Abby, Write Solutions)

This might be the issue that drives my opposition to Fiverr. You’ll see why when you read these stories:

“I hired a designer on Fiverr to design a book cover. After asking for many iterations, and doing a lot of research, I realized all the images used were from a Google image search, one right after the other.” (Samson, Salon Your Way)

“I’ve had a lot of bad experiences on Fiverr. But, once I hired someone on the site to design a logo for a new business. After a few days he sent me a templated design that he’d stolen from another site. I requested several revisions but all of those were templated, as well. It wasn’t going anywhere, so I asked for a refund. The Fiverr designer refused the refund and said he’d spent time working on the logo. I raised it to the Fiverr support team, but they failed to give me a refund.” (Zak, Foolishness File)

“I hired a designer on Fiverr because he had a great online portfolio. But what I got back from him was bad clip art that didn’t follow any of my directions at all. Out of curiosity, I did some research into the logos he included in his portfolio. I reached out to companies who had their logos featured there, and I learned he’d stolen them and claimed as his work.” (Karen, Sweet Lulu’s Bakery On Wheels)

Issue #3: Having to fix or trash “cookie cutter” work

“We were having trouble with the branding of our subscription box and had low sales, so we decided to get our box redesigned on Fiverr. Unfortunately, our money went down the drain because both designers came up with boxes that were a lot worse than our original design. After such a horrible experience, we decided to hire a real packaging company and regret ever wasting time on Fiverr. Sometimes cutting corners to save a few bucks isn’t really worth the hassle.” (Karina, Hang-O-Matic)

“I hired someone who said they would personally create a custom promotional video to demonstrate how my app worked. It turned out to be some DIY slideshow where I would have to insert my own screenshots. Fiverr is NOT a good source for “custom” work. Many of the gigs use a cookie cutter program that feeds your images or text into some software and creates an unimpressive, unoriginal final product.  This gig was no different.” (Sheldon Martin, Texas Jack Poker)

Your business and your brand are worth more than the issues you’ll face on Fiverr.

Now that we’re on the same page, I don’t want to leave you hanging without a solution to find work that will fit your budget and/or your timeline.

Turn on the power of your visual brand! Enter your email below to grab my 15-point checklist.

Get weekly design tips and resources in your inbox to help you save time – starting with these free tips!

You have Successfully Subscribed!

By filling out this form, you are consenting to be added to my email list.

This site uses Akismet to reduce spam. Learn how your comment data is processed. 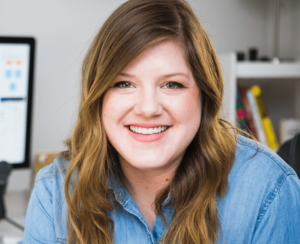 Award-winning designer specializing in helping health and fitness coaches stand out with strategic websites and brands.

– The Downfalls of Using Wix or Weebly for Your Website

The best strategy to get more clientsTell me!

You can find out more about which cookies we are using or switch them off in settings.

This website uses cookies so that we can provide you with the best user experience possible. Cookie information is stored in your browser and performs functions such as recognising you when you return to our website and helping our team to understand which sections of the website you find most interesting and useful.

Strictly Necessary Cookie should be enabled at all times so that we can save your preferences for cookie settings.

If you disable this cookie, we will not be able to save your preferences. This means that every time you visit this website you will need to enable or disable cookies again.